Thanks to the people at the Marin Master Gardeners I found out my farm is infested with grubbs!

These pesky and strange looking soil mongrels hang out about 4-6 inches below the the top of the soil and reek havoc on the roots of your plants.

I learned earlier in the summer that when you find certain critters in your fields you need to look for them at a certain time of the year to prevent the next generation from returning. One idea was to turn the soil in the spring just before planting.

So I went ahead and turned the soil now as I’m preparing the beds for the winter. That’s when I found all these guys! Turns out the Marin Master Gardener had a good suggestion. They recommend placing the bugs out on an open space for birds to come and get them. I did that last weekend and gave a bunch to the crows. When I told my neighbor about the bugs she said her chickens would love to eat them. “They are full of fat!” she said.

Now when I dig up a new area on the farm I look for the bugs and collect them for Helen’s chickens. Now, Helen brings me eggs! How’s that for sustainable farming?

Urban farming is still in it’s infancy but there are plenty of  efforts to bring food production into our cities and closer to the populations we are trying to feed.

In Boston, Caleb Harper is the Director of the City FARM, which is part of the Open Agriculture Initiative located in the MIT Media Lab. Harper wants to address the needs of a growing world population and the dwindling sources of land and water. Also, he points to the need to bring farming closer to the consumer. But he doesn’t necessarily see his ideas replacing current large scale farming methods.

In Montreal, Mohamed Hage is taking a commercial tack on this idea. His Lufa Farms is another large scale effort underway to bring farming to the urban environment. Beginning in 2011, Lula Farms built the world’s first commercial rooftop greenhouse. This 32,000 square foot polyculture facility now delivers 70 metric tons of food to the local population. Lula built a second facility in 2013. This 43,000 square foot facility delivers 120 metric tons of food per year.

The Lufa Farm system is designed to be sustainable in terms of water use, energy use, and pest controls. They also deploy technology in their delivery system which utilizes marketing and e-commerce tools to allow customers to select what goes in their $30 basket of food that can be delivered to more than 150 local pick up sites — even on the day the food was harvested.

These urban agricultural advancements are not planning to replace the large scale farming that delivers the vast majority of our food. However, it does expand our capabilities to deliver fresh food locally. Perhaps more importantly, these efforts may lead to similar advancements to our current framing system to improve our environment and food production.

Picked a few fresh items for dinner today. The eggplant was not that successful this year but it tastes good. Tomato and basil always go together and the peppers went well in the salad. 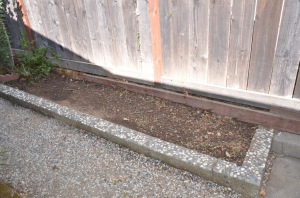 Tomato plot cleared for the winter.

This week we cleared a small area of the farm on the side of the house for winter.

This 20 square foot plot was where we first started successfully growing food on the farm. We pretty much only plant tomatoes there because it’s so warm. This year we had a couple of heirloom plants but it also got overgrown with volunteer cherry and yellow pear tomatoes.

The October tomatoes are amazing and fresh. We’ve had a small trace of rain over the past few weeks but it’s otherwise been very warm and perfect for tomatoes. The soil in this area seems to hold up nicely despite the fact that our neighbor has a very large apple tree on the other side of the fence. We grow some roses and mint there too.

This year next to that area we also planted sunflowers which were started by Tony Mekisich, the garden teacher at my daughter’s school and planted by Mia. We also harvested the sunflowers which were very prolific. I tasted them too and it’s amazing how good and fresh they are just picked! 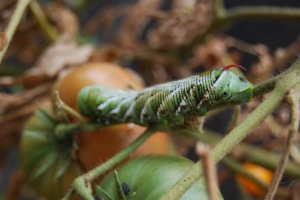 One thing we also found this week was two very large tomato hornworms. It’s amazing how large these little guys get when they have so much food to eat. Thankfully they didn’t take too much of our harvest.

I read up on this pest a bit and it seems like we should be able to prevent them in the future with a few simple organic methods. The best method I found was to till the soil in the spring before planting to disturb the pupa.

I also a found some products that claim to have naturally occurring bacteria that may also help. One had “Spinosad” in it’s ingredients and the other had “Bacillus Thuricide.” I’ll be looking into this a little more closely for next year.

It’s that time of the year when the sunflowers are blooming nicely. They are such a joy in the yard. Sunflowers brighten the area and bring such beautiful color to yourenvironment.

These flowers were started at a school garden nursery and brought to our farm by my daughter Mia. They are such a blessing to have on the Lakritz Farm.

We are growing them along the north side of the house where we usually have tomatoes and hot peppers. The area and soil proved to be excellent habitat for sunflowers.

Sowing the Seeds for Future Farming

We gathered a good harvest of seeds this summer and are planting new crops for the fall. But we had plenty to give away so that’s what we did!

Summer Sunshine From the Farm

Here’s a little summer sunshine sunflower from the farm.